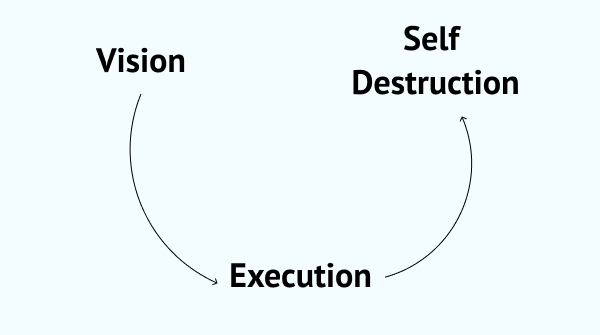 Arnold Schwarzenegger, in “Terminator 2”, was sent from the past to protect John Connor. Or, that’s what we think. He was actually sent to prevent the war. Once he ensures John’s safety, the model 101 Terminator lowers himself into a boiling pit of lava and self-destructs.

Because if he had lived on, so would the chip in his head and Skynet can use that to develop the technology which starts the war. So, the only way to fulfil the mission is to self-destruct. Terminator, being a robot, could logically see that.

Organisations, made up of people, cannot.

Every company should go through a vision, execution and destruction cycle.

Every organisation exists to solve a problem and it begins with a vision (mission, purpose etc). That’s their reason for existence—the “why” of the company.

The definition that resonated with me - “where the company wants a community, or the world, to be as a result of the company’s services” - Hubspot.

Every organisation must work towards achieving its vision and that happens here.

This is their plan. Their roadmap. The products they build. The services they offer. Everything they do.

Every organisation must build a world where they don’t need to exist because the problem they set out to solve doesn’t exist anymore.

Most companies don’t get to self-destruct and that’s a bad thing.

The case for a self-destruction mindset

Self-destruction should be the ultimate motive of any group that sets out to solve a problem. When that happens - the problem they set out to solve no longer exists. History tells us this. Successful social movements die out after their goals are met. Military units are disbanded, and soldiers sent home after the war has been won.

But no organisation, team or individual operates with a self-destruction mindset. It’s unthinkable. It’s unspeakable.

The case for self-destruction mindset at an organisation level

When organisations don’t think with a self-destruction mindset, they are focused on short term goals like revenue and ‘growth’. This is when they get stuck in an infinite execution cycle and lose sight of why they exist. They become aimlessly wandering tourists when they initially set out to be adventurists on a mission.

The case for self-destruction mindset at a team level

But teams are even more short sighted. They fight for their survival. They fight with the organisation for budgets and head-count, forgetting that the real enemy is the problem they set out to solve.

Teams are formed to support each other. Teams should emerge and dissolve like a bell curve and not grow exponentially. When teams grow exponentially, the organisation’s focus shifts from the real problem to managing the team.

A product is built to solve a problem. Marketing is needed to tell the world how well the product solves that problem. Sales are required to convince people to buy the product. Customer support is necessary to help people use the product.

The case for self-destruction mindset at an individual level

Individual make up teams and teams make up organisations. When individuals work really hard to render themselves useless, that cascades upwards.

But, individuals are even more short-sighted. They treat their peers as competition, refuse to collaborate and share knowledge. They’re so afraid of machines replacing them without realising that, indeed, is part

When an individual operates with a self-destruction mindset, they will do everything in their power to ensure their job doesn’t exist anymore. That leaves room for others to focus on other unsolved problems, and this process is repeated until every individual can self-destruct.

The Happily Ever After

Why should we adopt this morbid mindset? Because things need to end. Problems need to be solved. If individuals want to continue working forever, teams will want to operate forever, and organisations will continue to exist forever-as zombies, lifeless but occupying space.

This is why smaller companies are better at solving problems than more prominent companies because the focus is laser sharp. As companies evolve, they lose focus on the initial issue as internal conflicts and battles arise. Over time, these internal battles receive more focus, and the external enemy is forever forgotten.

Organisations live but without solving the problem. Teams exist, but they fight for relevance within the organisation. Individuals work, no toil, but their effort goes towards irrelevant organisational issues rather than real world problems. This has to stop. We need to focus our efforts on real world problems, and that can only happen if we agree that our primary motivation is to eliminate the need for our existence, i.e. self-destruct.